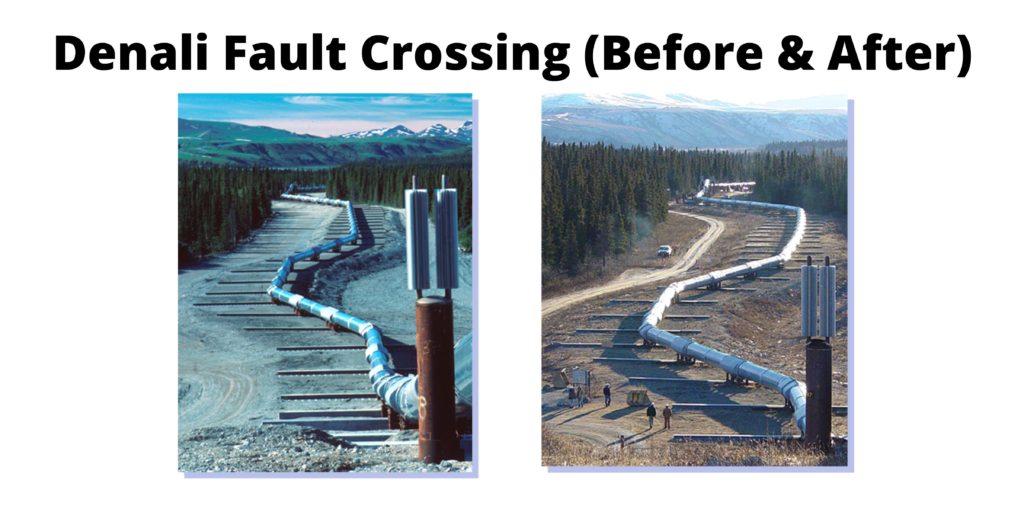 Shortly after 1 p.m. on November 3, 2002, a magnitude 7.9 earthquake ruptured the Denali Fault in the Alaska Range, roughly 90 miles south of Fairbanks. The quake fractured the earth’s surface for 209 miles, crossing beneath the Trans Alaska Pipeline System (TAPS). The Denali Fault earthquake was the strongest recorded in the Interior of Alaska, comparable in size and type the one that devastated San Francisco in 1906.

According to the U.S. Geological Survey, the powerful shock experienced on November 3, may have been preceded by a magnitude 6.7 shaker that occurred nearby on the same fault, just 10 days earlier.

The following are accounts and memories from TAPS employees on the event, the success of early engineering and design, and the resiliency of the pipeline.

“Hillary, we are having an earthquake.”

Hillary Schaefer (Then-Pipeline and Civil Maintenance Coordinator, Pump Station 9): “After the Oct. 23, 2002, quake at Nenana Mountain, I spent quite a bit of time in the identified Denali Fault zone, crawling around, taking pictures of every anchor, every shoe, making sure that we were still above tolerances for the above ground structures and checking for any damage that may have been caused by that quake. There was evidence that the pipe had moved. I observed fresh Teflon on crossbeams. Fast forward to November 3, I had just started my third hitch as the pipeline and civil maintenance coordinator at Pump Station 9. I decided to take a hot pizza lunch out to the team working at Remote Gas Valve (RGV) 80 and the crew that was hauling rock and storing it along the Right-of-Way (ROW). I was driving back to the station, crossing the Tanana River Bridge, and I was just looking at the pipeline and thinking about how resilient the pipeline was. After the reconnaissance work I did after the precursor quake, I thought, ‘Man, it would have been neat to actually see the pipeline move.’ You never see it move. It just sits there, static. I got a call on the radio from one of the baseline crew – ‘Hillary, we are having an earthquake.’ I was driving, I never felt it. I thought they were messing around with me. The radio sounded again – ‘Hillary, we are experiencing a significant earthquake.’ I pulled over on the Richardson Highway, jumped out, landed on the road, and I still didn’t feel anything. I jumped back in the truck and continued heading to Pump Station 9. The next call over the radio was from a helicopter pilot. He said, ‘Hillary, the bird is on the landing strip, it is fueled and ready for mission instructions.’”

Mike Malvick (Then-Supervisor for the System Engineering Group): “The Incident Management Team assembled in Fairbanks. Response crews were out at the Denali Fault zone within an hour or two – we had photographs coming back before sunset that day. On day one we confirmed a lot of information related to damage caused by the earthquake. As more information was coming in from the field, discussions were being held to ensure Alyeska was bringing in enough people and support to manage the incident. We still had contact information for the original pipeline design experts, so after talking with civil engineers like Steve Sorenson, lead for the above ground pipeline maintenance program, we opted to call in Jim Maple, Doug Nyman, and a number of the engineers that designed these areas along TAPS. We got them enroute to Alaska to assist with earthquake response.”

“Like the Hulk had come in and twisted and tore the shoe apart.”

Aerial reconnaissance of the pipeline began almost immediately. The Operations Control Center (OCC) shut down the pipeline and was monitoring the leak detection system. Reconnaissance teams were dispatched to the Denali Fault to document the condition of the ground, crossbeams, shoes, anchors, and other damage that occurred due to the quake. In the fault zone, the ground was offset beneath the pipeline and violent shaking damaged pipeline supports near the fault, but the pipeline itself did not break.

Schaefer: “I remember getting to the fault line and driving up and down and seeing all the tripped anchors, cross beams and shoes on the ground, but the pipe itself was just settled and centered right back over where the crossbeam would have been. Around the line, it looked like a raven had pillaged a garbage can! There were pieces of insulation all over the place. You could tell that the pipe itself had jumped and banged between the Vertical Support Member (VSM) because there was denting on the VSM. The VSM on the very south end of the fault line, it really banged around in there. It ended up tearing the shoe and it looked like the Hulk had come in and twisted and tore the shoe apart.”

Schaefer: “We were so fortunate. Snow was late and the ground wasn’t frozen. Crews were working on dry ground. We were able to see, document, photograph and plan for the necessary repairs. If there had been snow on top of it or if it would have been spring break up, we would have missed a lot of the evidence in the initial hours and days after the quake. We would not have been able to respond as quickly as we did.”

Malvick: “We were afraid of aftershocks causing further issues. The pipeline was originally designed to have two consecutive VSMs fail, so essentially you could have 180 feet of pipe unsupported for a duration of time, while repairs were being done. There were a couple of places where the VSMs failed due to the quake. One of our first steps was to get the pipe supported utilizing wood cribbing. We needed every bit of 8 x 8 timber that we could find. We put a call out to the North Slope and our partners asking for every piece of cribbing that folks had on hand. The full Alaska oil industry supported our response efforts. We were able to obtain the cribbing and get the line supported, protecting the line from damage that may be caused by aftershocks. This allowed us the time and support to complete repairs and get the pipeline up and running again.”

Expertise and excellence from the start.

The condition of the pipeline was the result of careful engineering to meet stringent earthquake design specifications based on geologic studies done by the U.S. Geological Survey, Woodward-Lundgren and Associates, and Alyeska. Those studies located the Denali Fault within a 1,900-foot corridor crossing the pipeline route. Seismologists and geologists working on the initial design of the pipeline estimated that the pipeline could be subjected to a magnitude 8.0 earthquake in which the ground might slip 20 feet horizontally and 5 feet vertically. These estimates proved to be remarkably accurate for the 7.9 magnitude earthquake that occurred in 2002. The rupture crossed the pipeline within the 1,900-foot corridor and the fault shifted about 13 feet horizontally and 2.5 feet vertically.

Malvick: “The original seismologists, geologists, and engineers did excellent work. They expected the fault to show up in this area. They established a zone of about 1,900 – 2,000 feet.

“Elden Johnson, one of the engineers in the integrity management engineering team, made the comment, ‘It is kind of like a late game field goal, you kick the ball and just hooks it, making it inside the uprights.’ That’s what happened here. Back in the early 1970s, the seismologists knew that there was an earthquake fault, but weren’t sure exactly where it would appear or manifest in relation to the pipeline corridor. So, they planned out about 2,000 feet to work within, and they got it right. This is the area that the special construction was done”

To accommodate the projected fault movement and intense shaking from a magnitude 8.0 quake, the pipeline was laid on sleepers rather than on rigid pillar supports, where it crosses the Denali Fault. The pipeline rests on Teflon shoes that are free to slide on long horizontal steel beams, such that the pipeline moves when the ground moves. The violent shaking damaged a few of the pipeline’s supports near the fault, but the pipeline itself did not break.

Malvick: “There are a couple of pictures that really tell the story of the significance of the design and engineering in the fault corridor.

“The special construction in the fault corridor didn’t utilize anchors in the zone. They didn’t want to restrain the pipe in a zone where ground movement could cause the pipe to move. They wanted the pipe to have freedom to move as necessary where the fault crossed the pipeline corridor. That is why the nearest anchors are on either side of the zone. Between the anchors, the pipeline rests on “sleepers,” beams set flush with the ground surface.

“From the before and after pictures, you can see how the pipeline shifted across the horizontal sleepers when the ground shifted.”

Malvick: “When the ground moved, it put the pipeline into compression. Because of the angle where the fault crossed the pipeline and the way the ground shifted, the pipe was pressed in on itself. We joke that we got an extra five feet of pipe out of the earthquake and that the pipeline held Alaska together when the ground shifted. Because the pipe was in compression it was like a loaded spring. The Civil engineers and aboveground pipeline maintenance crew had to figure out how to carefully release that pressure through the anchors on either side of the special build location to take the compression off the pipe so that it wasn’t wanting to move.”

Another serious issue that was detected was liquefaction and sand boils that appeared around some of the VSMs and RGV 91. Liquefaction was a result of the strong, prolonged earth shaking that transformed loose, water-saturated sediments into a liquid slurry.

Schaefer: “A reconnaissance team was sent to RGV 91 because of settlement and liquefaction around the buried valve in the wild and scenic river floodplain. Crews ended up excavating the valve to make sure that the valve was still in good condition. A serious concern was that if the heavy valve had settled during liquefaction, the small diameter lines used to inject valve sealant would shear. When the valve was excavated, the crews found everything in pristine condition and no sign of damage.”

When the final reconnaissance was complete and it was determined that there was no leak, operations resumed on TAPS. The pipeline was shut down for approximately 66 hours and 33 minutes.

Malvick: “After the earthquake, several scientific papers were written and presented on the earthquake and the design and engineering success of TAPS. There were a number of presentations done by our engineers and seismic experts about the performance of the pipeline at seismic conferences nationally and globally. Very few seismic engineers get to test out their assumptions and facility designs, very few get to come back and check out performance. Just 25 years after construction, we experienced the big quake that the pipeline was designed for. Elden Johnson joked that it was like mother nature’s pop quiz.”

Schaefer: “I have so much respect for the design, the engineering, the resiliency – to survive an earthquake that large. The original design engineers, geologists and seismologists work is so inspiring. Just seeing the system hold up to that earthquake is quite impressive.”

2020: Hiring on at Alyeska during COVID pandemic